For this improvisation on Festplassen, a well-known public square in Bergen, I initially started out with 2 loaves of bread in a plastic bag from a local supermarket, 1 foccaccia and my wallet which contained Norwegian kroner coins.
My interaction with the audience (both pigeons, people passing by randomly and people standing still to watch the group performance) was as follows:
I fed the pigeons small pieces of bread and foccaccia bread. At one point one of the pigeons sat on top of a loaf of bread and ate from it, while I was holding the bread. A while later, some children running by caused the pigeons to fly off.
I handed out pieces of bread to passers-by and other spectators. The foccaccia was by far the most popular choice.
Many people were uninterested in the bread.
I walked around the square and threw small pieces of bread in the direction of the audience, often chasing passers-by and continuing to throw bread pieces in their direction.
At one point I started throwing and rolling out Norwegian kroner coins out on the square and in the direction of the audience instead of bread pieces. I only noticed one passer-by who picked a coin up. I ended up tossing approximately 100 Norwegian kroner on the square, all Norwegian kroner coins. 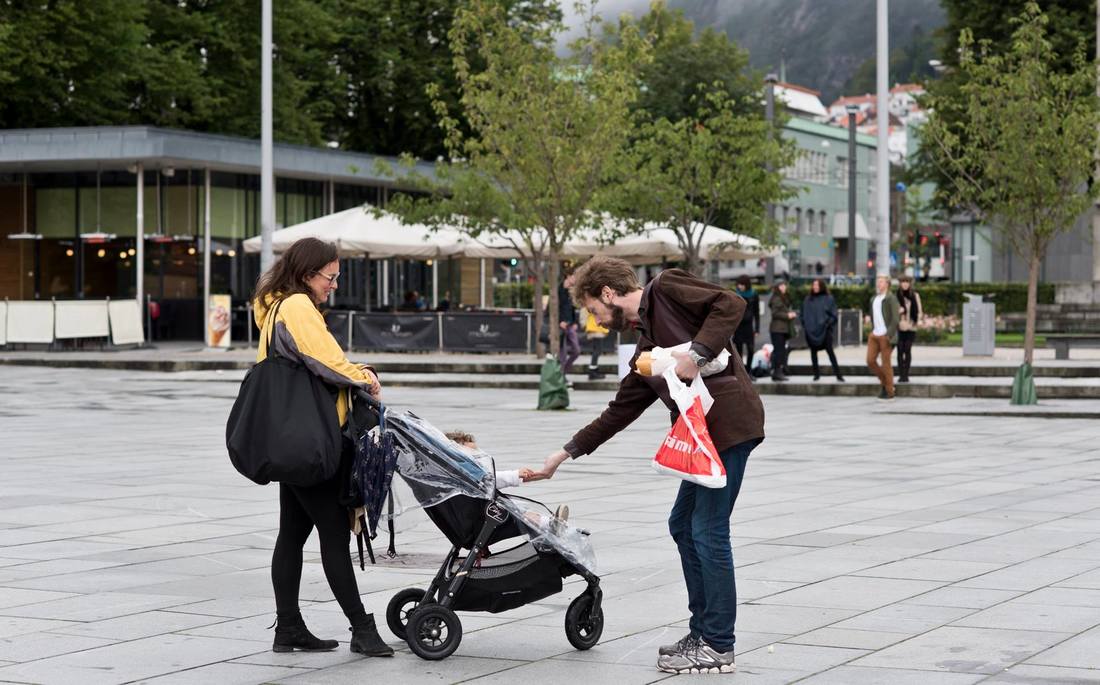 Photo: Jordan Hutching
​I had removed the inside of one of the loaves of bread, leaving the crust which I tried to use as a hat. I put a piece of bread in each of my ears as a type of earplug. I encouraged audience members to try my bread hat on, but no one was interested. One young adult audience member was for some reason particularly annoyed: "Do I look like the type of person who would be interested?" he snarled in a sarcastic tone. His mates couldn't quite grasp what I was doing, and were asking me about the bread and what this whole thing was all about. I answered matter-of-factly that I was simply trying to feed the birds and the people in the area, describing what I had done in the performance so far.
At the end of the performance, I filled one of the hollowed-out bread loaves with water from the nearby lake, Lille Lungegårdsvannet. The loaf was now leaking water.
I tore the bread up and let one of the pieces drift off in the lake.
For the remainder of the bread, I put small pieces of it in my mouth and spat them out one by one as far as I could into the lake. ​